The Engineering Core of the Eaton-Peabody Laboratories (EPL) aims to apply and impart its team's combined engineering knowledge and understanding to the work of the EPL and, by extension, the commons of science and medicine. 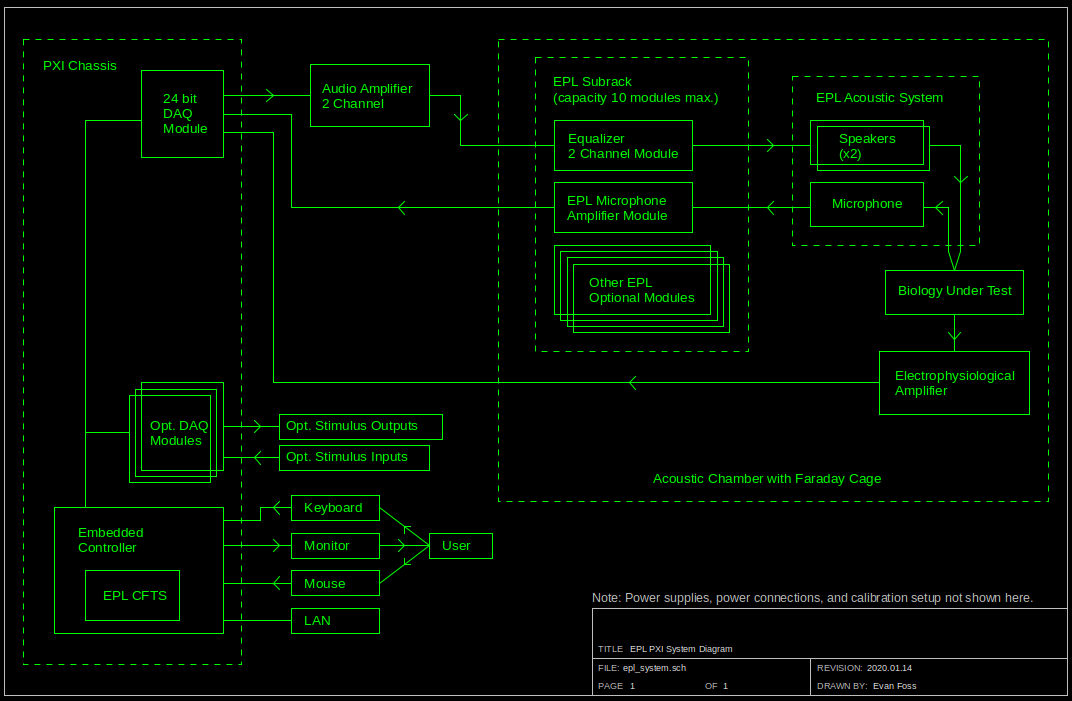 Block diagram showing the signal path from the PXI to the cochlea and back.

EPL engineers designed and implemented a new system for signal generation that uses off-the-shelf DAQ hardware to lower system costs. It is powerful enough to meet the most demanding needs in auditory neuroscience, yet inexpensive enough to be affordable for the less-demanding application.

This system, consisting of PXI digital I/O boards in a PXI chassis and 24-bit outputs and inputs with user-accessible signal grounds isolated from the embedded computer, allows stimulus synthesis and response measurement over the entire dynamic range of hearing.

Each of the EPL-designed components is it's own subproject. The software is available for free download as well as the designs for the hardware. It shown in Figure 1 is a monaural configuration consisting of: 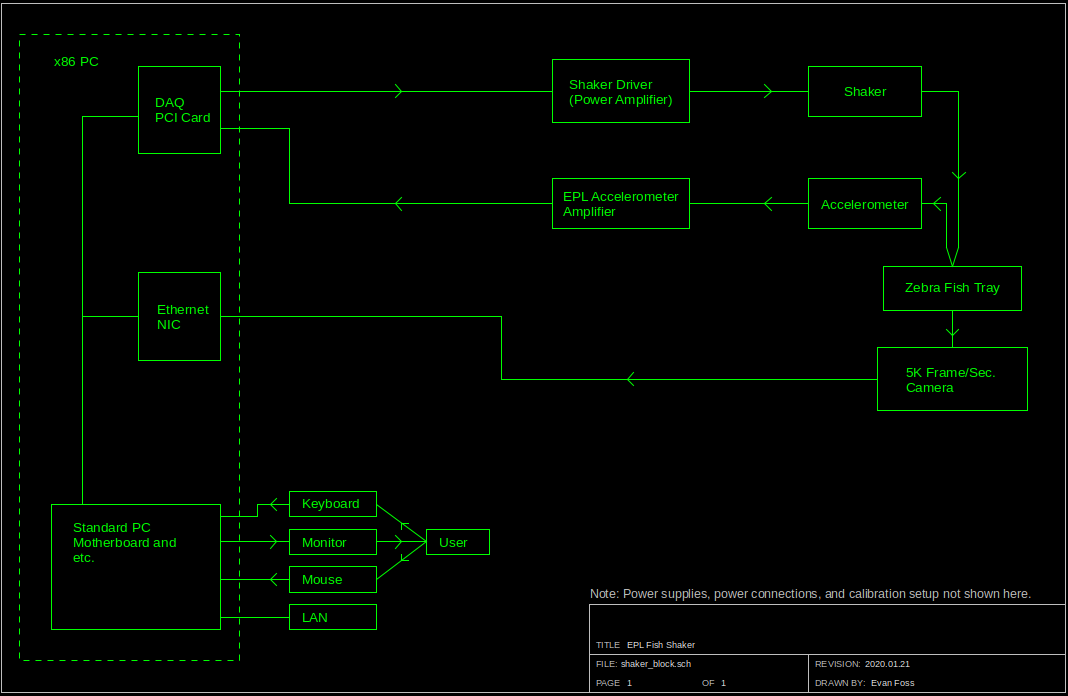 Lateral Line Stimulator block diagram showing the signal path from the DAQ computer to the shaker and back.

The Lateral Line Stimulator was created as a collaboration between the EPL Engineers and Lavinia Sheets. Description coming soon. This project makes use of the EPL Accelerometer. EPL Accelerometer Amplifier - This is a modified version of our EPL Microphone Amplifier. It has been altered to operate down to 10Hz and to power the preamplifier in many common MEMS accelerometers which use 9V instead of the 1.5V common to our current preferred microphone.

The EPL Engineers' contributions to the EPL Behavioral Platform are mostly in the form of the designs for the EPL Subrack modules used in the Polley Lab. These are currently the EPL Lick-o-Meter, which we packaged for them to fit the rest of our EPL Subrack abstract and EPL Valve Driver. More modules are under active development for this lab's work.

Because of the scale of this project it has its own abstract here. To understand how it fits into the greater chamber systems at EPL, see the Auditory Electrophysiology Platform.

EPL engineers and investigators developed the Cochlear Function Test Suite (CFTS) to allow flexible control of the EPL PXI SG/DAQ for stimulus and averaging parameters in the measurement of amplitude-vs-level functions for ABRs, CAPs, DPOAEs, and VsEPs. They've also developed a CAP-threshold function that tracks, across frequency, the SPL required to produce a CAP of criterion magnitude. The software includes subroutines for rapid, densely sampled acoustic calibration, including measuring probe-tube microphone sensitivity against a calibrated microphone in a coupler and sound pressure produced by each earphone in situ.

The CFTS performs acoustic calibrations and basic assays of cochlear function in laboratory animals. It is a package of programs written in LabVIEW that control digital stimulus generation and data acquisition using National Instruments input/output boards. The programs are already compiled and do not require a LabVIEW license to run. This means, however, that they cannot be changed. If a user wants to change the labeling or functionality, the underlying LabVIEW programs (called virtual instruments, or “VI’s”) can also be downloaded. Using these VI’s requires the LabVIEW programming environment and a LabVIEW license (these can be obtained at http://www.ni.com/). The basic elements of LabVIEW are relatively easy to learn so that small changes (changing the labeling or adding an additional input) might be done by an experimenter who has little programming or engineering background.

The cochlear function tests and procedures are:

EPL Subrack example. This rack has all 10 slots populated.

The EPL Subrack project is really at the heart of our ecosystem for physiological measurement. It solves a few problems common in this area: 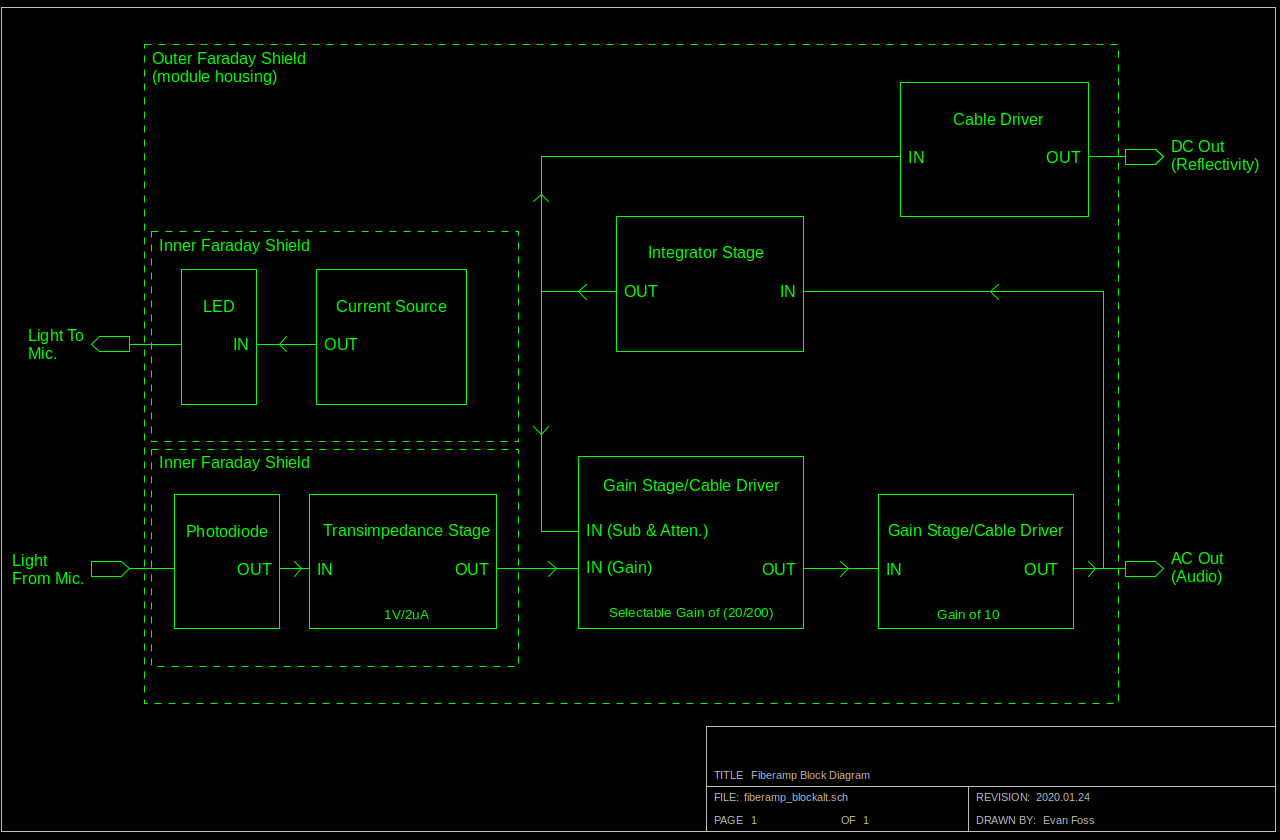 The EPL Fiberoptic Microphone Amplifier was developed by Evan Foss for the Wallace Middle-Ear Unit to enable fiber-optic microphones developed by Elizabeth Olson at Columbia University to be used to measure sound pressure within the inner ear. [J. Acoust. Soc. Am. 103: 3445-3463 (1998)] This built on the LED and photodiode selection done by Ishmael. S. W. and replaced his original proof of concept and reduced the package count by at least a factor of 4 over the original design by Olsen while consolidating it into one independent box for the first time. This current iteration is one of the optional modules for the EPL Subrack and contains a fiber-optically coupled LED light source with low noise constant current source, and a matched fiber-optically coupled photodiode connected to a low noise, high gain amplifier set.

The major novelty of this design is it's low noise current source, reduced number of stages, use of higher gain earlier in the signal path, and lower impedance path between stages all of which are combined to provide a lower noise output than previous designs. The lower impedance path is made possible by using a DC servo circuit to offset the DC component of the input signal rather than a simple blocking capacitor. This servo output is also tapped to produce the DC output to measure sensor reflectivity. The whole project fits inside a single EPL Subrack Module and uses it's front panel as a heatsink. 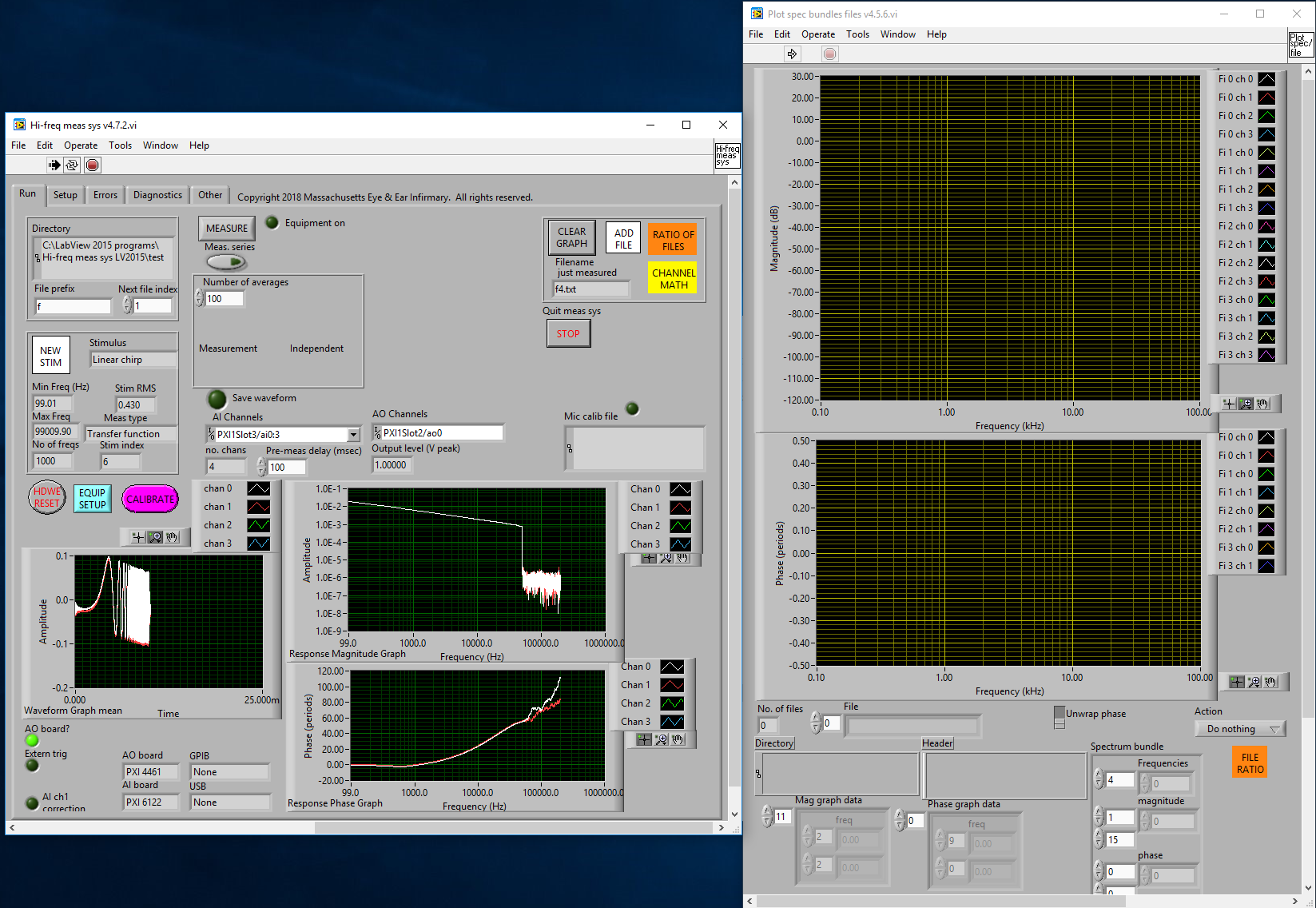 Part of the HFMS design philosophy was to make different choices and overcome features of SysID that we didn't like. It has the flexibility to run on a variety of cards and platforms and has extensive in-experiment and independent plotting capabilities. Data are stored in ASCII in a form readable by Matlab.

Trouble Hearing in Noisy Places? An Audio Game May Help…

The Miracle of Balance: What Happens When the System Gets Out of Sync

What We’ve Learned About the Balance System From Astronauts