Microglia, the immune cells of the central nervous system, shown to regulate neuroinflammation 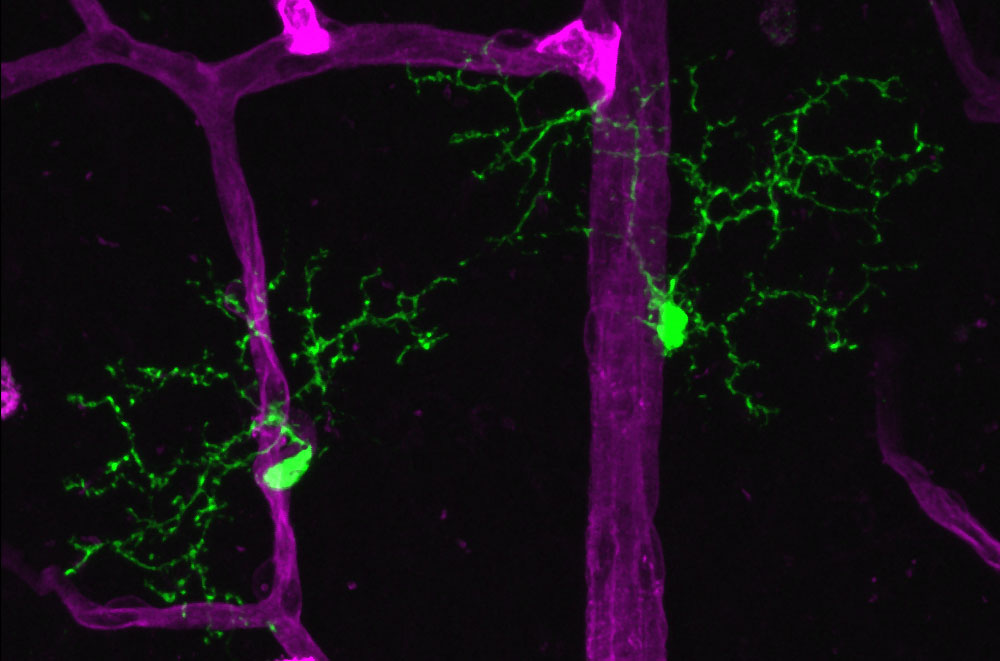 New research identifies that microglia play a vital role in regulating neuroinflammation in autoimmune disease, which may one day lead to treatment targets for the retina disease, uveitis

Boston, Mass. — A research team at Massachusetts Eye and Ear has shown that microglia, the primary immune cells of the central nervous system—including the retina of the eye—serve as “gatekeepers,” or biosensors and facilitators, of neuroinflammation in a preclinical model of autoimmune uveitis. Uveitis is one of the leading causes of blindness, accounting for approximately 10% of significant visual impairment worldwide.

In a report published online in Proceedings of the National Academy of Sciences (PNAS), the researchers describe, for the first time, a role for microglia in directing the initiation of autoimmune uveitis by orchestrating the inflammatory response within the retina. In reaction to disease induction, microglia closely associate with the retinal vasculature and facilitate inflammatory immune cell entry past the blood brain, or ocular, barrier into the retina. When the researchers depleted microglia in this model, they observed that the disease was completely blocked.

“Normally, the blood brain barrier serves as an impediment and prevents the immune response from going into tissues of the central nervous system, including the retina. However, our results provide clear evidence, that in the context of uveitis, microglia can facilitate entry of inflammatory immune cells into the retina, and enable the host immune responses to attack cells that are not normally recognized by the immune system,” said senior author Kip M. Connor, PhD, vision researcher at Mass. Eye and Ear and Associate Professor of ophthalmology at Harvard Medical School. “Until now, the role of microglia in retinal disease has not been fully understood, but our research shows—for the first time—that these cells serve as gatekeepers from the immune system to the central nervous system. This gateway not only has implications for treating uveitis, but may provide future avenues for drug delivery across the blood brain barrier for other diseases of the central nervous system.”

Despite significant advances in research and therapeutics, the prevalence of autoimmune uveitis has not been reduced in the past 30 years. Uveitis is characterized as inflammation of the retina as well as the uveal tissues, optic nerve and vitreous, wherein a large influx of immune cells into the eye coincides with elevated inflammatory destruction. Uveitis caused by an autoimmune disease, defined by autoreactive inflammation against the retina, occurs in a variety of diseases including Bechet’s disease, sarcoidosis, and Vogt-Koyanagi-Harada disease. Patients with autoimmune uveitis often suffer serious visual loss after persistent inflammation due to immune mediated damage to the neuronal cells of the retina.

Since microglia have multiple phenotypes and/or different stages of activation that can be associated with either harmful or beneficial effects in disease pathogenesis, their role and function in disease progression is not well defined. Researchers across all fields of medicine have recently begun to elucidate the function of microglial cells in various conditions. For example, in Alzheimer’s, Parkinson’s and other neurodegenerative diseases of the brain, microglia are thought to be harmful. In ophthalmology, it is known that microglial cells are activated in response to a number of developmental and disease indications and their roles in disease are thought to be context dependent, where they can be either beneficial or harmful.

“These findings provide the first insights into how microglia respond and function during a systemic autoimmune disease targeting the eye,” said lead author Yoko Okunuki, MD, PhD, an investigator in Dr. Connor’s laboratory and Instructor of Ophthalmology at Harvard Medical School.

“This novel work by Dr. Connor and colleagues identifies that microglia regulate entry through the blood-retinal barrier, and it is our hope that these finding can be harnessed for future targeted therapies for autoimmune uveitis,” says Joan W. Miller, MD, the David Glendenning Cogan Professor and Chair of Ophthalmology at Harvard Medical School, Chief of Ophthalmology at Mass. Eye and Ear and Massachusetts General Hospital, and Ophthalmologist-in-Chief at Brigham and Women's Hospital. “It is becoming increasingly clear that microglia are involved in a number of central nervous system-related autoimmune diseases, so these results are of interest to the broader scientific community as well.”

This research was supported by the National Eye Institute of the National Institutes of Health under grant R01EY027303, the Massachusetts Lions Eye Research Fund, and by an American Macular Degeneration Foundation Prevention Award.

Massachusetts Eye and Ear, founded in 1824, is an international center for treatment and research and a teaching hospital of Harvard Medical School. A member of Partners HealthCare, Mass. Eye and Ear specializes in ophthalmology (eye care) and otolaryngology–head and neck surgery (ear, nose and throat care). Mass. Eye and Ear clinicians provide care ranging from the routine to the very complex. Also home to the world's largest community of hearing and vision researchers, Mass. Eye and Ear scientists are driven by a mission to discover the basic biology underlying conditions affecting the eyes, ears, nose, throat, head and neck and to develop new treatments and cures. In the 2018-2019 "Best Hospitals Survey,"U.S. News & World Report ranked Mass. Eye and Ear #4 in the nation for eye care and #6 for ear, nose and throat care. For more information about life-changing care and research at Mass. Eye and Ear, please visit our blog, Focus, and follow us on Instagram, Twitter and Facebook.

The Harvard Medical School Department of Ophthalmology is one of the leading and largest academic departments of ophthalmology in the nation. More than 400 full-time faculty and trainees work at eight Harvard Ophthalmology affiliate institutions, including Massachusetts Eye and Ear (home to Schepens Eye Research Institute), Massachusetts General Hospital, Brigham and Women’s Hospital, Boston Children’s Hospital, Beth Israel Deaconess Medical Center, Joslin Diabetes Center/Beetham Eye Institute, Veterans Affairs Boston Healthcare System, and Cambridge Health Alliance. Formally established in 1871, the department has been built upon a strong and rich foundation in medical education, research, and clinical care. Through the years, faculty and alumni have profoundly influenced ophthalmic science, medicine, and literature—helping to transform the field of ophthalmology from a branch of surgery into an independent medical specialty at the forefront of science.