Exosomes “swarm” to protect against bacteria inhaled through the nose 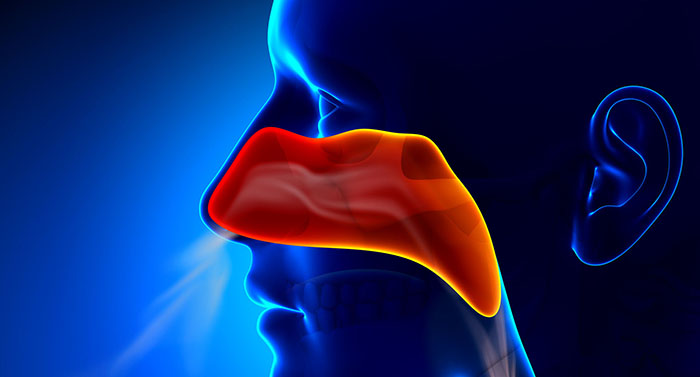 A newly discovered mechanism of the immune system may lead to new approaches in airway drug delivery.

Boston, Mass. — Bacteria are present in just about every breath of air we take in. How the airway protects itself from infection from these bacteria has largely remained a mystery — until now. When bacteria are inhaled, exosomes, or tiny fluid-filled sacs, are immediately secreted from cells that directly attack the bacteria and also shuttle protective antimicrobial proteins from the front of the nose to the back along the airway, protecting other cells against the bacteria before it gets too far into the body.

A research team from Massachusetts Eye and Ear describes this newly discovered mechanism in a report published online today in the Journal of Allergy and Clinical Immunology (JACI). The findings shed new light on our immune systems — and also pave the way for drug delivery techniques to be developed that harness this natural transportation process from one group of cells to another.

“Similar to kicking a hornets nest, the nose releases billions of exosomes into the mucus at the first sign bacteria, killing the bacteria and arming cells throughout the airway with a natural, potent defense,” said senior author Benjamin S. Bleier, MD, a sinus surgeon at Massachusetts Eye and Ear and associate professor of otolaryngology at Harvard Medical School. “It’s almost like this swarm of exosomes vaccinates cells further down the airway against a microbe before they even have a chance to see it.”

The JACI study was motivated by a perplexing previous finding from Dr. Bleier’s lab a few years ago. In studies of sinus inflammation, researchers found that proteins in the cells of the nasal cavity were also present in patients’ nasal mucus. The team wanted to know why and how these proteins were moving from the cells into the nasal mucus, hypothesizing that exosomes had something to do with that process.

The new findings described in the JACI study shed light on this process. When cells at the front of the nose detect a bacterial molecule, they trigger a receptor called TLR4, which stimulates exosome release. When that happens, an innate immune response occurs within 5 minutes. First, it doubles the number of exosomes that are released into the nose. Second, within those exosomes, a protective enzyme, nitric oxide synthase, also doubles in amount. As a well-known antimicrobial molecule, nitric oxide potently arms each exosome to defend against bacteria.

The exosome “swarm” process gets an assist from another natural mechanism of the nose — mucocilliary clearance. Mucocilliary clearance sweeps the activated exosomes over to the back of the nose, along with information from cells that have already been alerted to the presence of bacteria. This process prepares the cells in the back of the nose to immediately fight off the bacteria, arming them with defensive molecules and proteins.

In their experiments described in the JACI report, Dr. Bleier’s team sampled patients’ mucus and grew up their own cells in culture. They then simulated an exposure to bacteria and measured both the number and composition of the released exosomes. They found a doubling of both the number of exosomes and of antibacterial molecules after stimulation. The team then confirmed this finding in live patients and further showed that these stimulated exosomes were as effective as antibiotics at killing the bacteria. Finally, the team showed that the exosomes were rapidly taken up by other epithelial cells, where they were able to “donate” their antimicrobial molecules.

Along with this new understanding of the innate immune system, the authors on the JACI papersuggest that their findings may have implications for new methods of delivering drugs through the airway to be developed. More specifically, as natural transporters, exosomes could be used to transfer inhaled packets of therapeutics to cells along the upper airway — and possibly even into the lower airways and lungs.

“The nose provides a unique opportunity to directly study the immune system of the entire human airway — including the lungs,” said Dr. Bleier.

Massachusetts Eye and Ear, founded in 1824, is an international center for treatment and research and a teaching hospital of Harvard Medical School. A member of Partners HealthCare, Mass. Eye and Ear specializes in ophthalmology (eye care) and otolaryngology–head and neck surgery (ear, nose and throat care). Mass. Eye and Ear clinicians provide care ranging from the routine to the very complex. Also home to the world's largest community of hearing and vision researchers, Mass. Eye and Ear scientists are driven by a mission to discover the basic biology underlying conditions affecting the eyes, ears, nose, throat, head and neck and to develop new treatments and cures. In the 2018-2019 "Best Hospitals Survey,"U.S. News & World Report ranked Mass. Eye and Ear #4 in the nation for eye care and #6 for ear, nose and throat care. For more information about life-changing care and research at Mass. Eye and Ear, please visit our blog, Focus, and follow us on Instagram, Twitter and Facebook.