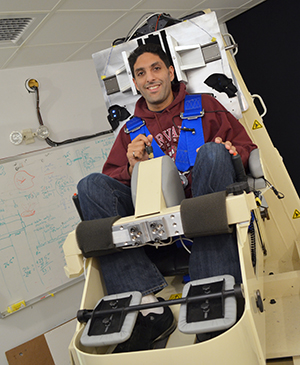 New research led by Massachusetts Eye and Ear suggests that vestibular function testing may predict which astronauts or pilots are better at controlling vehicle motion during flight, especially during situations where gravity is less than that on Earth.

Boston, Mass. — A new study led by researchers at Massachusetts Eye and Ear found that good performance on a piloting task was associated with lower vestibular thresholds, which represent stronger ability to sense and perceive information about motion, balance and spatial orientation. Published online today in the Journal of Neurophysiology, the findings suggest that astronauts or pilots with higher vestibular thresholds are more likely to become disoriented during flight, especially in situations when gravity is less than that on Earth – such as on the Moon.

“Even with all of the improvements in aviation safety, disorientation is still a cause of fatal accidents,” said senior author Faisal Karmali, PhD, Co-Director of the Jenks Vestibular Physiology Laboratory at Massachusetts Eye and Ear and an Instructor in Otolaryngology at Harvard Medical School. “We now know that there’s an important role for the vestibular system in flying planes and landing spacecraft safely. Our study looked at healthy young subjects – fairly representative of the pilot population – and found a strong correlation between their vestibular thresholds and how well they could keep themselves upright during a simulated piloting task.”

“Just like in a hearing test when audiologists are looking for the quietest sounds that someone can hear, vestibular threshold testing looks for the smallest motion that someone can sense,” said Dr. Karmali.

The second task, designed to measure manual control performance, was designed to simulate what happens in an air or space aviation scenario. Subjects were again seated on a motion device in the dark, but this time, they were perturbed as the device would randomly move around. The researchers measured how well subjects could keep themselves upright using a joystick to correct their motions.

An additional task was used to measure manual control performance in situations where gravity was less than (0.5g) or greater than (1.33g) what it is on Earth. This simulated hypo- and hyper-gravity is applicable to situations encountered in rocket launch and landing (during which astronauts experience forces that are equivalent to three times the gravity that it is on Earth).

“If we extrapolate the gravity finding to the Moon, where gravity is one-sixth of that on Earth, that means that astronauts could potentially struggle to pilot on the Moon more than they would on Earth,” Dr. Karmali said.

This new knowledge has implications for crew assignment, perhaps leading to a screening test to determine which astronauts and pilots are more likely to have failure during landing, based on their vestibular function.

“If you have a group of astronauts on a flight, and two of them will be responsible for landing on the Moon, our work suggests that it may be worth measuring vestibular thresholds before making crew assignments, just as we assess hearing, eye sight, and physical fitness,” said Marissa J. Rosenberg, PhD, first author on the study.

The authors are now planning their next study, to determine how important the vestibular system is when subjects have the same instruments that pilots use to orient themselves in the dark or in fog.

In addition to the spaceflight applications, these findings are also important for our understanding of balance, especially in older people, but also in astronauts who are prone to falling on the Moon.

Massachusetts Eye and Ear, founded in 1824, is an international center for treatment and research and a teaching hospital of Harvard Medical School. Specializing in ophthalmology (eye care) and otolaryngology-head and neck surgery (ear, nose and throat care), Mass. Eye and Ear clinicians provide care ranging from the routine to the very complex. Also home to the world's largest community of hearing and vision researchers, Mass. Eye and Ear has pioneered new treatments for blindness, deafness and diseases of the head and neck. Our scientists are driven by a mission to discover the basic biology underlying these conditions and to develop new treatments and cures. In the 2018-2019 "Best Hospitals Survey," U.S. News & World Report ranked Mass. Eye and Ear #4 in the nation for eye care and #6 for ear, nose and throat care. For more information about life-changing care and research at Mass. Eye and Ear, please visit our blog, Focus, and follow us on Twitter and Facebook.