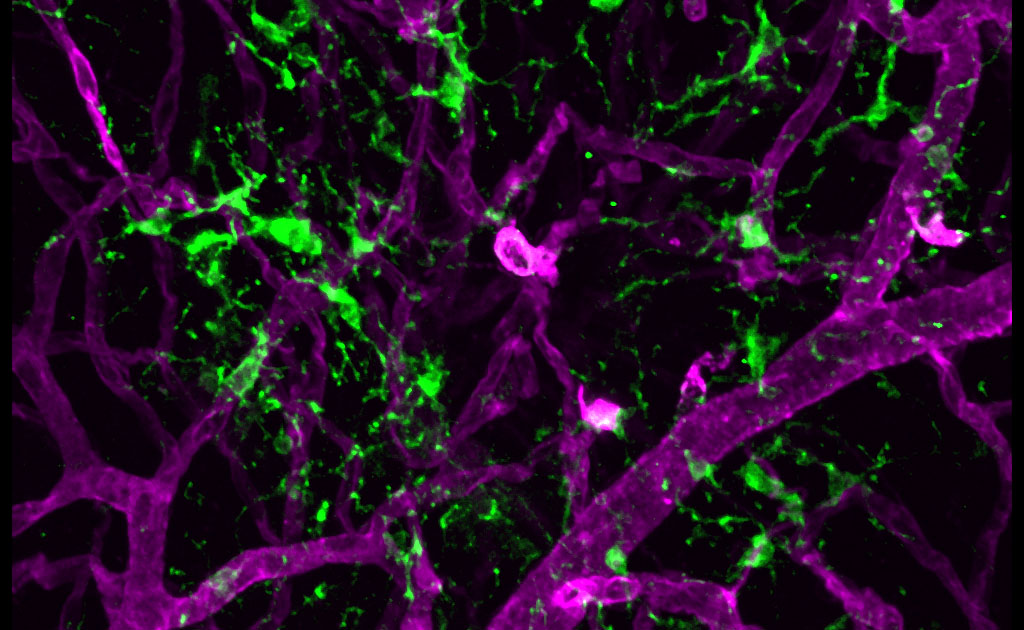 Boston, Mass. — A research team at Massachusetts Eye and Ear has shown that microglia, the primary immune cells of the brain and retina, play a protective role in response to retinal detachment. Retinal detachment and subsequent degeneration of the retina can lead to progressive visual decline due to photoreceptor cell death, the major light-sensing cell in the eye.  In a report published online today in the journal Proceedings of the National Academy of Sciences (PNAS), the researchers describe, for the first time, the beneficial role of microglial cells in the eye after retinal detachment — migrating to the site of injury to protect photoreceptors and to regulate local inflammation.

Affecting about 200,000 Americans per year, retinal detachments are considered sight-threatening medical emergencies. When the retina detaches from its normal position, it separates the blood vessels that supply oxygen to the eye, and photoreceptors — the major light-sensing cells of the retina — begin to die away. Retinal detachments can occur spontaneously, as a result of blunt trauma or as a side effect of a variety of eye diseases, including diabetic retinopathy, ocular tumors, and age-related macular degeneration.

The current standard of care for retinal detachment is surgical reattachment, with patients in the United States and Europe typically treated within one week. Today’s surgical techniques are highly effective in physically reattaching the retina, and – if surgery is timely – surgical outcomes are generally positive. However, in some cases, patients experience permanent vision loss accompanied by changes in color vision.

Researchers around the world — across all fields of medicine — have recently begun to shed light on the function of microglial cells in various conditions. In Alzheimer’s, Parkinson’s and other neurodegenerative diseases of the brain, they are thought to be harmful.

In the ophthalmology setting, microglial cells have been known to be activated in retinal detachment; however, it was previously unknown if these cells were harmful or protective against photoreceptor cell death.

The authors on the PNAS report are hopeful that these findings suggest a new therapeutic avenue for preserving photoreceptors after retinal detachment.

“Clinically, in the context of retinal detachment, we think promoting these cells would be of significant therapeutic benefit — perhaps early on, when they can keep inflammation in check,” said Yoko Okuniki, M.D., Ph.D., a postdoctoral fellow at Mass. Eye and Ear and the study’s lead author. “This could prevent the initial photoreceptor cell loss, preserving vision longer after retinal detachment and providing an extended therapeutic window for surgery.”

For copies of the research study, please reach out to pnas@nas.edu.

Massachusetts Eye and Ear, founded in 1824, is an international center for treatment and research and a teaching hospital of Harvard Medical School. Specializing in ophthalmology (eye care) and otolaryngology-head and neck surgery (ear, nose and throat care), Mass. Eye and Ear clinicians provide care ranging from the routine to the very complex. Also home to the world's largest community of hearing and vision researchers, Mass. Eye and Ear has pioneered new treatments for blindness, deafness and diseases of the head and neck. Our scientists are driven by a mission to discover the basic biology underlying these conditions and to develop new treatments and cures. In the 2017-2018 "Best Hospitals Survey," U.S. News & World Report ranked Mass. Eye and Ear #1 in New England for eye (#4 in nation) and ear, nose and throat care (#2 in nation). For more information about life-changing care and research at Mass. Eye and Ear, please visit our blog, Focus, and follow us on Twitter and Facebook.

The Harvard Medical School Department of Ophthalmology (eye.hms.harvard.edu) is one of the leading and largest academic departments of ophthalmology in the nation. More than 400 full-time faculty and trainees work at nine Harvard Ophthalmology affiliate institutions, including Massachusetts Eye and Ear, Schepens Eye Research Institute of Massachusetts Eye and Ear, Massachusetts General Hospital, Brigham and Women’s Hospital, Boston Children’s Hospital, Beth Israel Deaconess Medical Center, Joslin Diabetes Center/Beetham Eye Institute, Veterans Affairs Boston Healthcare System, VA Maine Healthcare System, and Cambridge Health Alliance. Formally established in 1871, the department has been built upon a strong and rich foundation in medical education, research, and clinical care. Through the years, faculty and alumni have profoundly influenced ophthalmic science, medicine, and literature—helping to transform the field of ophthalmology from a branch of surgery into an independent medical specialty at the forefront of science.