Boston, Mass. — Researchers at Massachusetts Eye and Ear/Harvard Medical School and Boston University have successfully shown neuroprotection in a Parkinson’s mouse model using new techniques to deliver drugs across the naturally impenetrable blood-brain barrier. Their findings, published in Neurosurgery, lend hope to patients around the world with neurological conditions that are difficult to treat due to a barrier mechanism that prevents approximately 98 percent of drugs from reaching the brain and central nervous system. 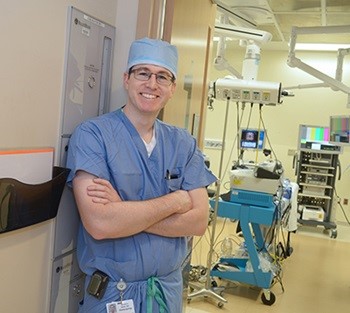 “We are developing a platform that may eventually be used to deliver a variety of drugs to the brain,” said senior author Benjamin S. Bleier, MD (in photo), of the department of otolaryngology at Mass. Eye and Ear/Harvard Medical School. “Although we are currently looking at neurodegenerative disease, there is potential for the technology to be expanded to psychiatric diseases, chronic pain, seizure disorders and many other conditions affecting the brain and nervous system down the road.”

Using nasal mucosal grafting, researchers delivered glial derived neurotrophic factor (GDNF), a therapeutic protein in testing for treating Parkinson’s disease, to the brains of mice. They showed through behavioral and histological data capture that their delivery method was equivalent to direct injection of GDNF – the current gold standard for delivering this drug in Parkinson’s disease despite its traumatic nature and high complication rates – in diffusing drugs to the brain.

The researchers chose to test their delivery method with GDNF because the therapy has been shown to delay and even reverse disease progression of Parkinson’s disease in pre-clinical models. The study was funded by The Michael J. Fox Foundation for Parkinson’s Research (MJFF).

“Brain diseases are notoriously difficult to treat due to the natural protections the body builds against intrusion,” said Jamie Eberling, PhD, senior associate director of MJFF research programs. “Dr. Bleier’s group has identified a potential avenue to pass that barrier, and we look forward to the next stage of research to further test its utility in people with Parkinson’s disease .”

Nasal mucosal grafting is a technique regularly used in the ENT field to reconstruct the barrier around the brain after surgery to the skull base. ENT surgeons commonly use endoscopic approaches to remove brain tumors through the nose by making a window through the blood-brain barrier to access the brain. Once they have finished the treatment, they use adjacent nasal lining to rebuild the hole in a permanent and safe way. The safety and efficacy of these methods have been well established through long-term clinical outcomes studies in the field, with the nasal lining protecting the brain from infection just as the blood brain barrier has done.

Dr. Bleier saw an opportunity to apply these techniques to the widespread clinical dilemma of delivering drugs across the barrier to the brain and central nervous system. By functionally replacing a section of the blood-brain barrier with nasal mucosa, which is more than 1,000 times more permeable than the native barrier, surgeons may create a “screen door” to allow for drug delivery to the brain and central nervous system.

The technique has the potential to benefit a large population of patients with neurodegenerative disorders, where there remains a specific unmet need for blood-brain penetrating therapeutic delivery strategies.

“We see this expanding beyond Parkinson’s disease, as there are multiple diseases of the brain that do not have good therapeutic options,” Dr. Bleier said. “It is a platform that opens doors for new discovery and could enable drug development for an underserved population.”

The study was supported by a grant from the Michael J. Fox Foundation for Parkinson’s Research and represents a collaborative effort between Mass. Eye and Ear and Dr. Xue Han of the Biomedical Engineering Department at Boston University. Other authors include Richie E. Kohman, Kevin Guerra, Angela Nocera, Shrestha Ramanlal, Armine H. Kocharyan and William T. Curry.


About Massachusetts Eye and Ear

Mass. Eye and Ear clinicians and scientists are driven by a mission to find cures for blindness, deafness and diseases of the head and neck. Now united with Schepens Eye Research Institute, Mass. Eye and Ear is the world's largest vision and hearing research center, developing new treatments and cures through discovery and innovation. Mass. Eye and Ear is a Harvard Medical School teaching hospital and trains future medical leaders in ophthalmology and otolaryngology, through residency as well as clinical and research fellowships. Internationally acclaimed since its founding in 1824, Mass. Eye and Ear employs full-time, board-certified physicians who offer high-quality and affordable specialty care that ranges from the routine to the very complex. U.S. News & World Report’s “Best Hospitals Survey” has consistently ranked the Mass. Eye and Ear Departments of Otolaryngology and Ophthalmology as top in the nation. For more information about life-changing care and research, or to learn how you can help, please visit MassEyeAndEar.org